Get the Facts on the Covid-19 Vaccine

When the Sisters of St. Joseph of Carondelet purchased the ground in 1869, that would become Nazareth Living Center, it was a working farm and orchard. In 1872, the first Sisters came to live here, and the farm provided nourishment for the Sisters and dear neighbors both at Carondelet, the Motherhouse, and Nazareth.

As a reflection of the past and as we prepare to celebrate the 150th Anniversary of Nazareth Living Center, three apple trees will be planted on this historical, holy ground. 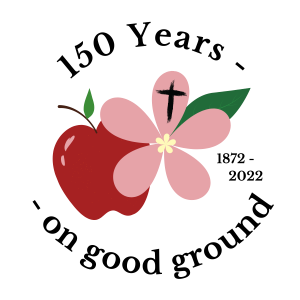 …the Sisters of St. Joseph were founded in France in 1650 as one of the first apostolic religious congregations in the Church—meaning they were not confined to monasteries, but were sent forth to serve the People of God?

…six Sisters of St. Joseph were sent as missionaries to St. Louis, Missouri in 1836?

…land was purchased in Lemay, Missouri in 1872 with the purpose of caring for the growing number of Sisters of St. Joseph as they aged and grew more frail?

…from 1872 until today, the Sisters of St. Joseph have cared for older and frail adults—Sisters and Laity alike—on this Nazareth property?

…what started as an apple orchard has become sacred ground where life is nurtured; bodies are healed and;—O the Privilege!—Spirits are sent to God to sing and dance forever.